How Many Americans Own Cars? 51 Car Ownership Statistics 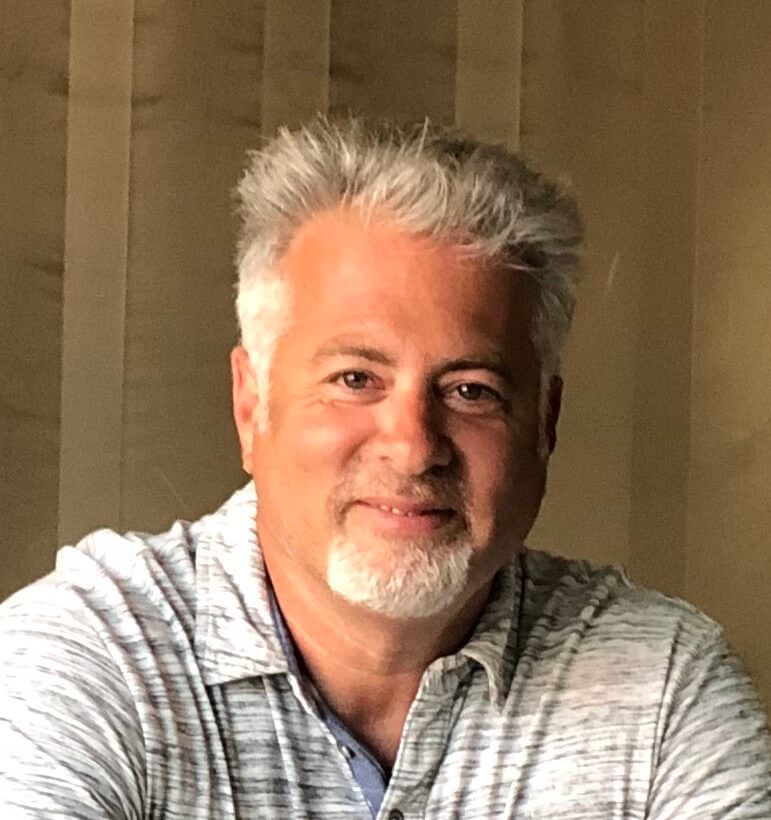 Did you know that there are 275 million vehicles registered in the U.S?

You’re about to see a list of up-to-date car ownership statistics.

Read on to find new stats, facts, and trends related to:

Chapter 1: How Many Cars Are In The US? 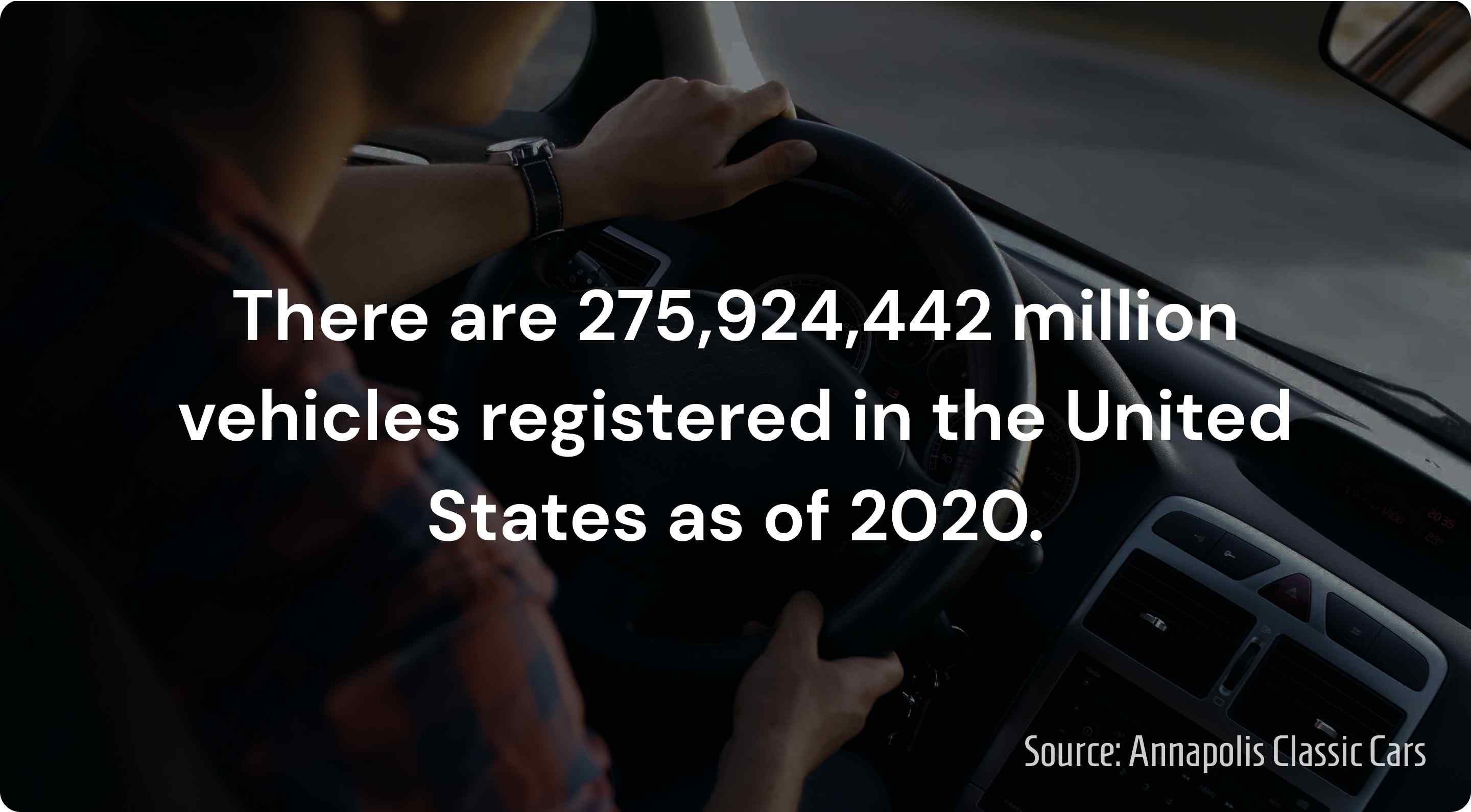 More trucks are owned in the U.S. than any other vehicle type. Cars come in second place before motorcycles and buses.

There is a very noticable difference in the type of car ownership in the U.S. While there are less than 4.1 million publicly owned vehicles, there are more than 272.4 million privately owned vehicles which mean together, they comprise the more 275 million vehicles owned in the United States.

The number of total registered vehicles in the US is steadily growing year-over-year. From 2014 to 2020, there has been consistent growth as there were about 260 million vehicles in 2014, but by 2020, that number had increased to more than 275 million total registered U.S. vehicles. 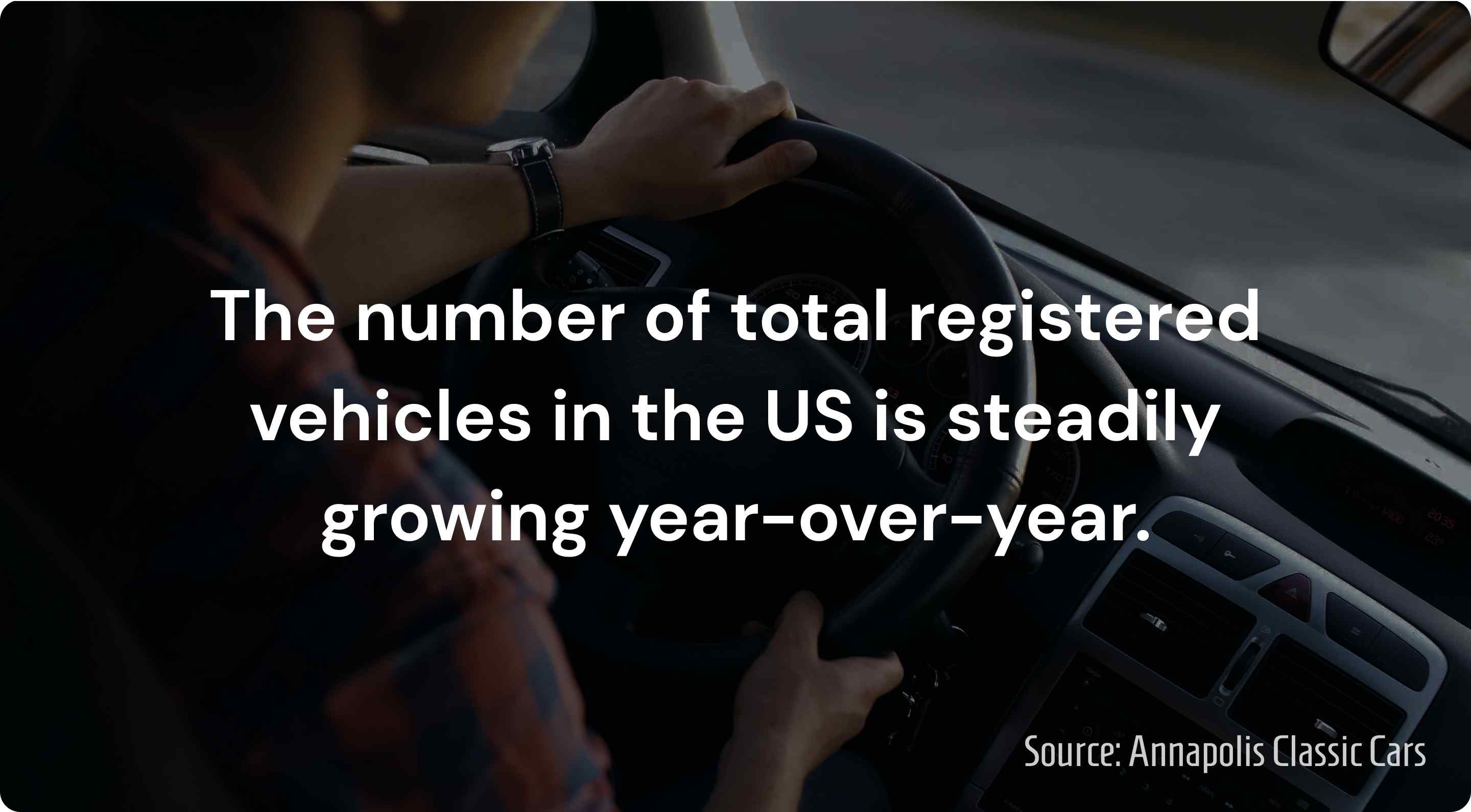 Depending on where you live in the U.S., vehicle ownership varies significantly.

There are several factors that impact the number of vehicles owned in a city, including size, population, demographics, and more.

Bankrate's analysis recently found that vehicle ownership is highest outside U.S. metropolitan areas. For example, there are several areas in Texas, California, Arizona, and Colorado that have the lowest percentage of vehicles among households. Keep reading:

10 U.S. Cities with the Highest Percentage of Vehicle Ownership

Some of America's largest metropolitan areas have the lowest vehicle ownership rates, which is mainly due to ready access to public transportation, as well as the high cost of parking your car in these cities.

New York City has the lowest percentage of vehicle ownership in the U.S. Followed by NYC is the nearby metropolis Newark located in New Jersey.

Washington, D.C. and Massachusetts are areas with lower vehicle ownership among U.S. households.

10 U.S. Cities with the Lowest Percentage of Vehicle Ownership

The state with the most cars per household in the U.S. is California, with 9 of the top 10 U.S. cities for vehicle ownership.

10 U.S. Cities with the Most Cars Per Household

If you'd like more information on statistics surrounding car ownership and race, read more at Governing.com, the University of Michigan, and UC Berkeley News.

Research published by the Federal Reserve shows the average age of a new car or truck buyer is around 53 years old. 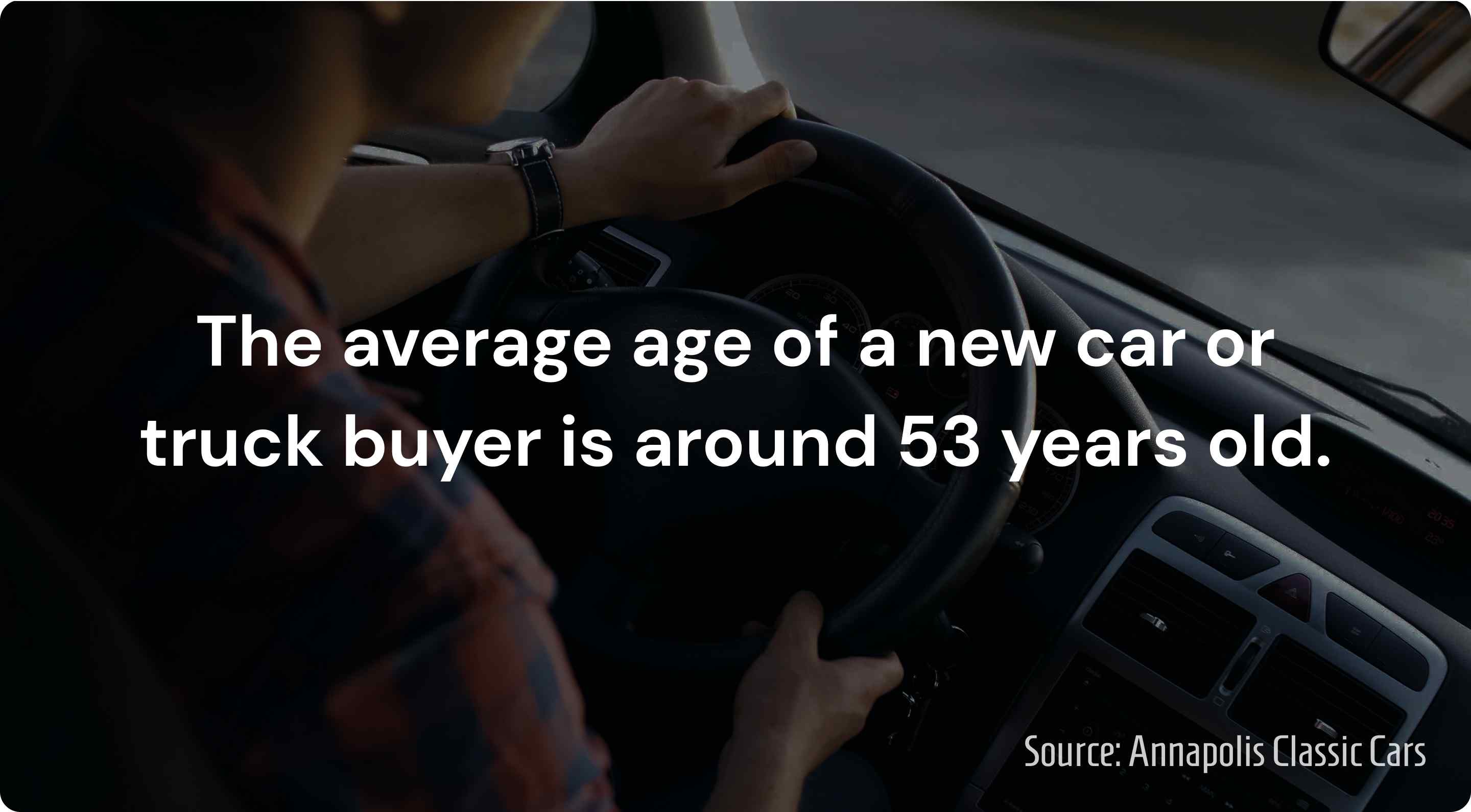 Over the past decade, this age has increased a noticable amount, and among new vehicle buyers, the 55+ age group has a 15% increase since 2000.

There is a sharp increase in vehicle ownership once income surpasses $50,000. Low income earners find it very difficult to have their own vehicle largely due to the high running costs of owning a car. 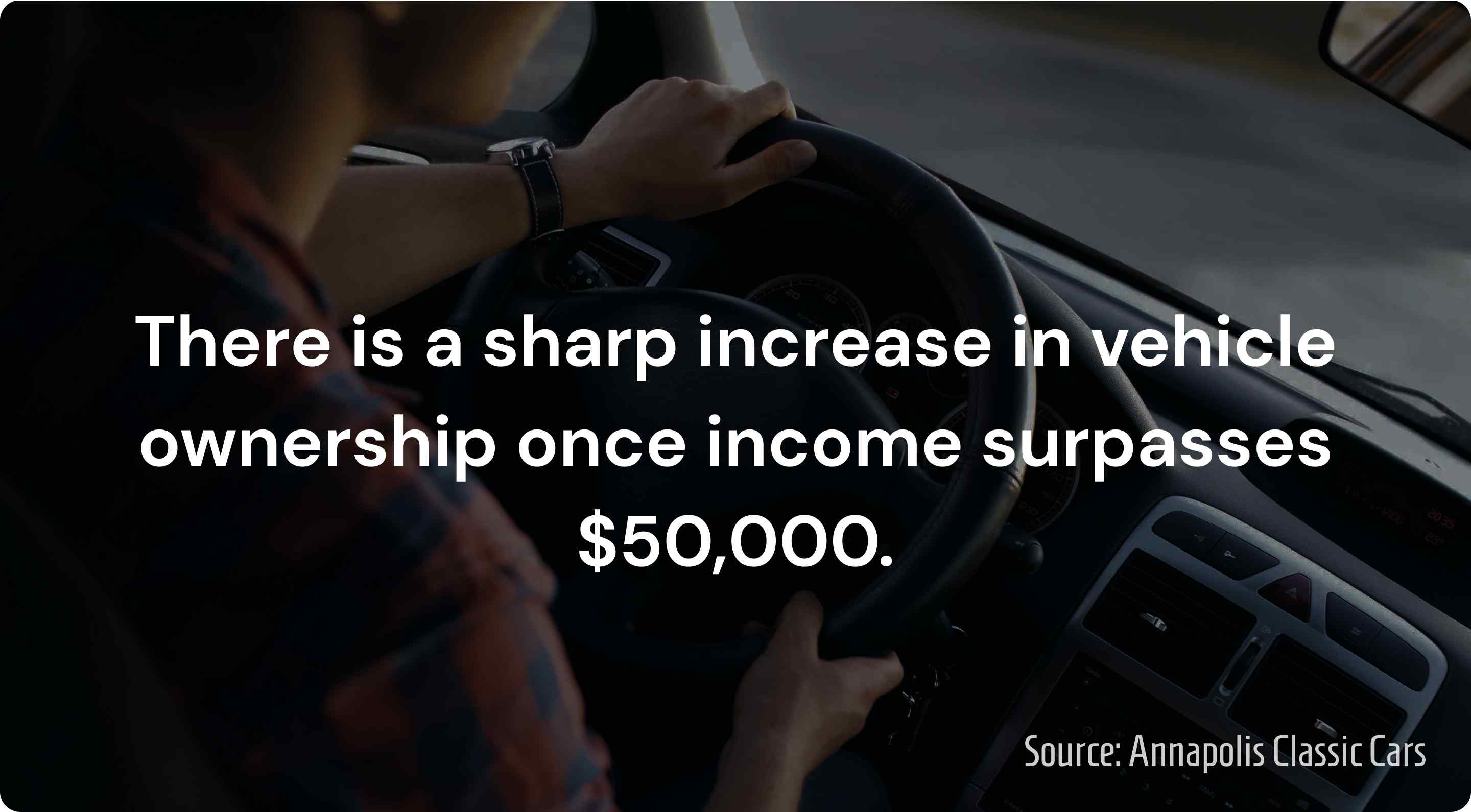 In the United States, men are much more likely to own cars than women, even though more women hold a valid driver's license as of 2019. As of 2020, women accounted for around 35.4% of car owners in the US. 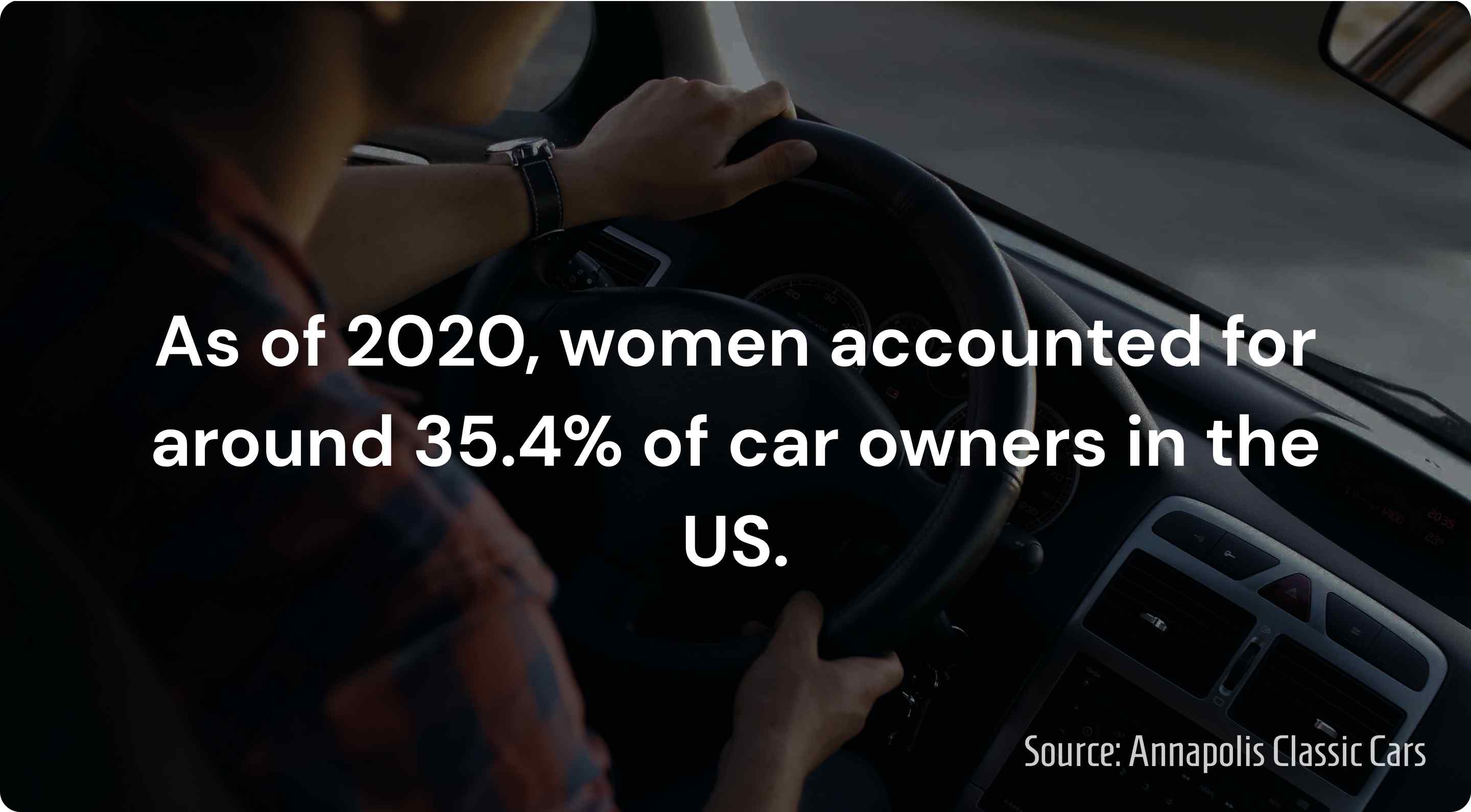 Chapter 6: What Percentage Of Americans Own A Car?

93% of U.S. households had access to at least one car in 2019, according to data from the Federal Highway Administration. 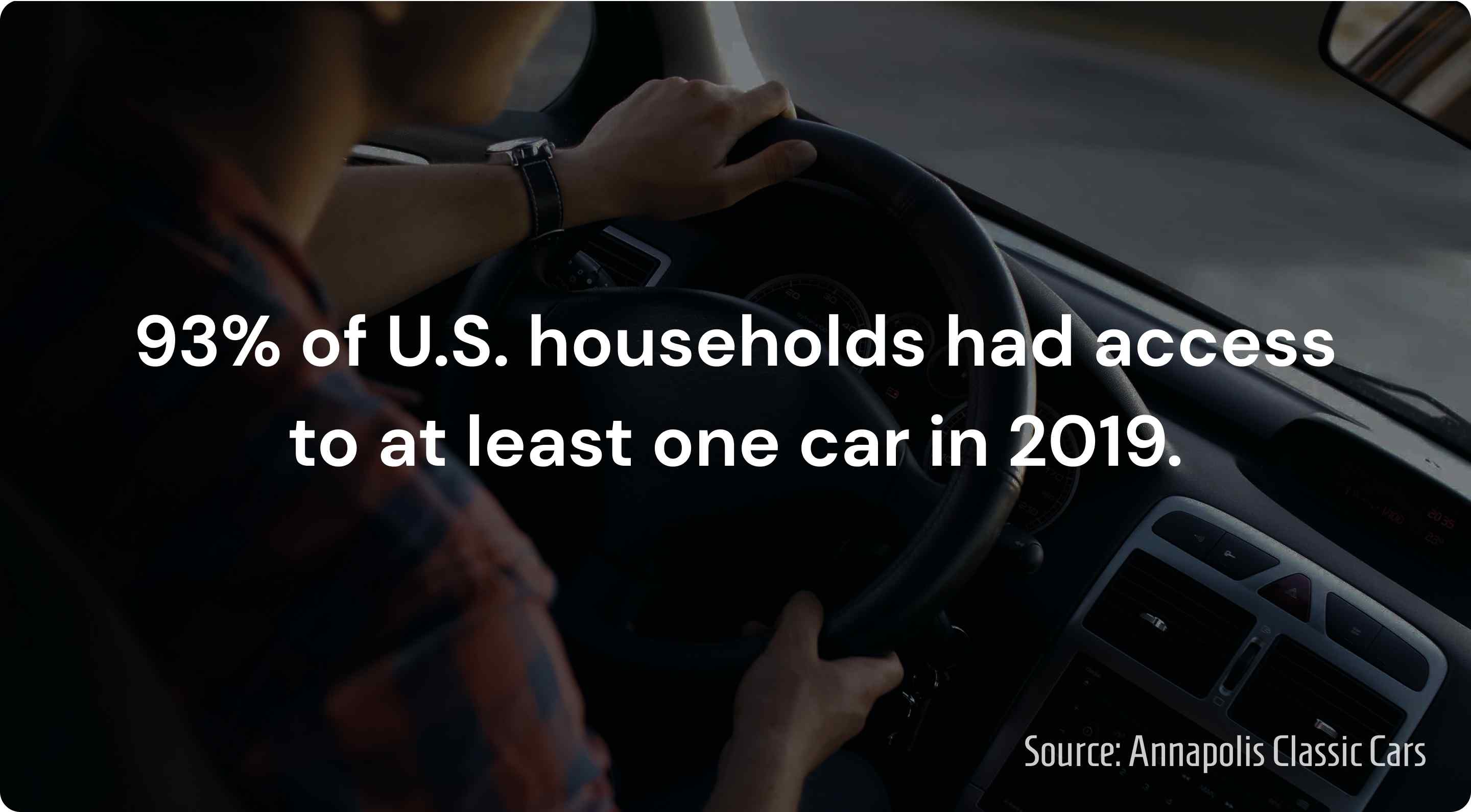 Vehicle ownership is increasing in an analysis of a 5-year period from 2015 to 2019. Interestingly, the number of households with one or two vehicles has decreased over time.

On the other hand, there has been a consistent increase in vehicles of three or more per household.

This shows a strong indication that since American households are growign in size, the number of vehicles is also increasing to accommodate more people.

Studies also show an increase in income, allowing Americans to afford the car payment in addition to costs of insurance and maintenance.

Percentage Of Americans That Own More Than One Car 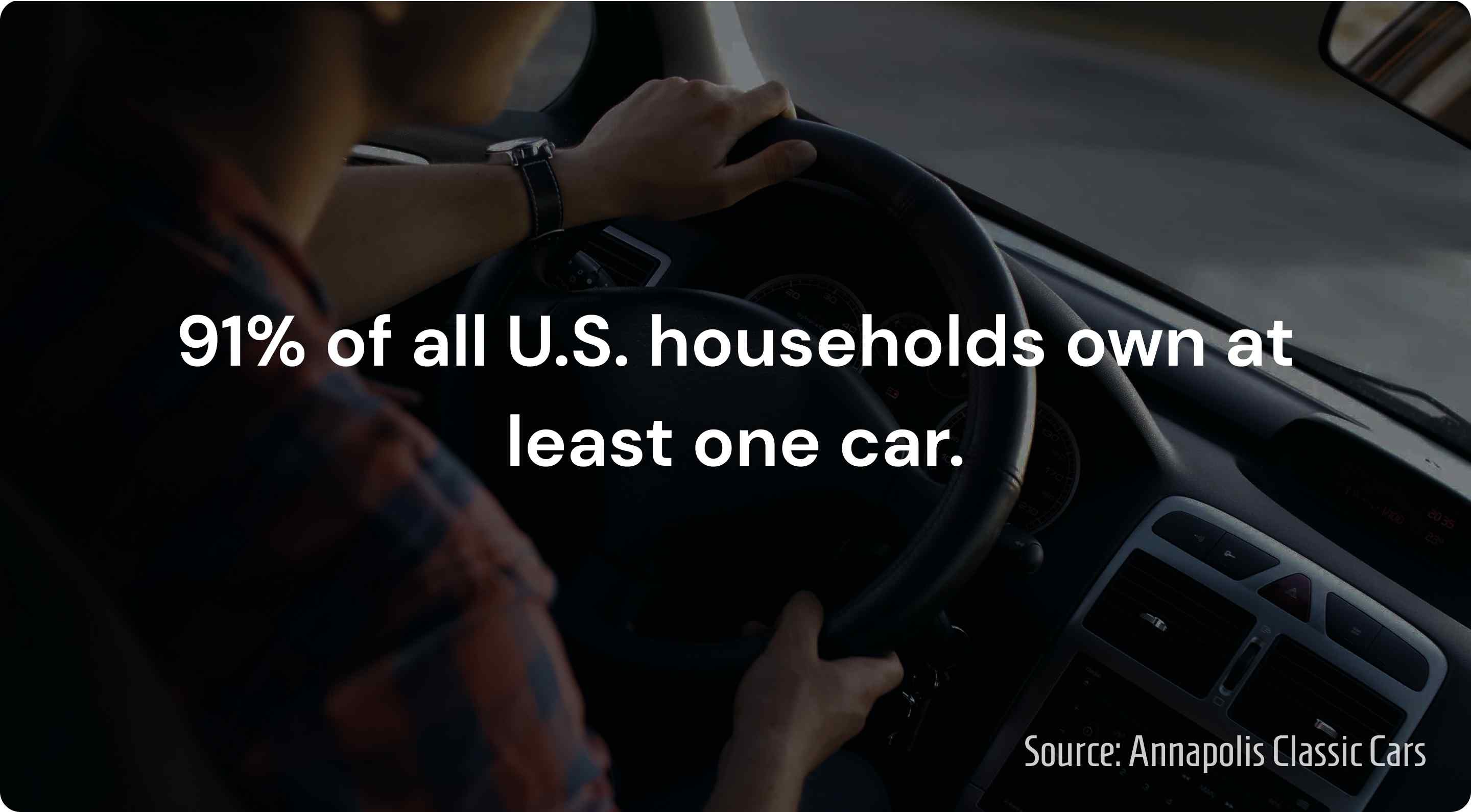 How much of the world’s population owns cars? 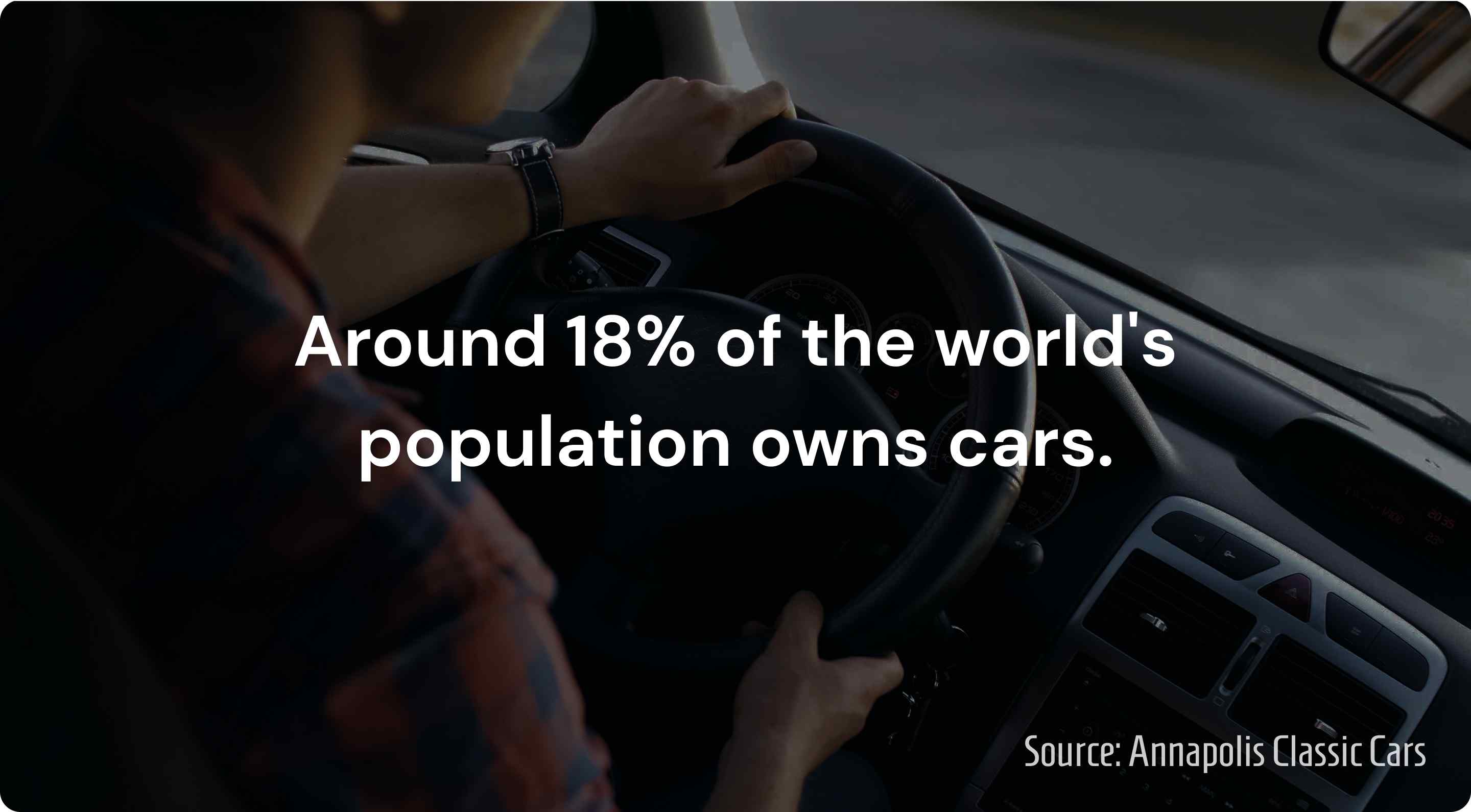 Which country has the highest car ownership?

China has the highest car ownership in the world in 2021, with 302 million cars, and in 2009 the country became the world's largest new car market. 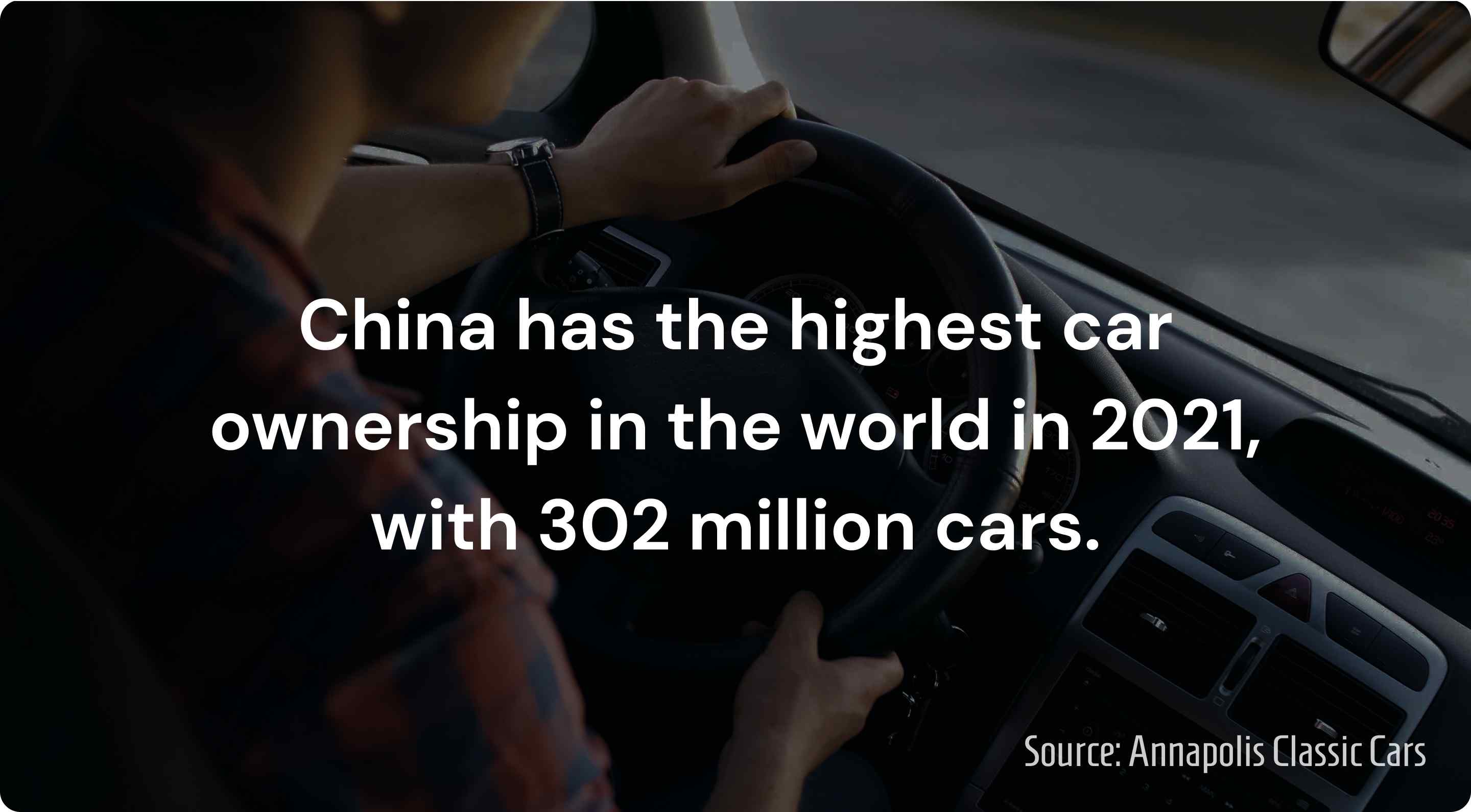 In fact, in 2011, 80 million cars and commercial vehicles were built, led by China, with 18.4 million motor vehicles manufactured that same year.

How many cars are owned globally? 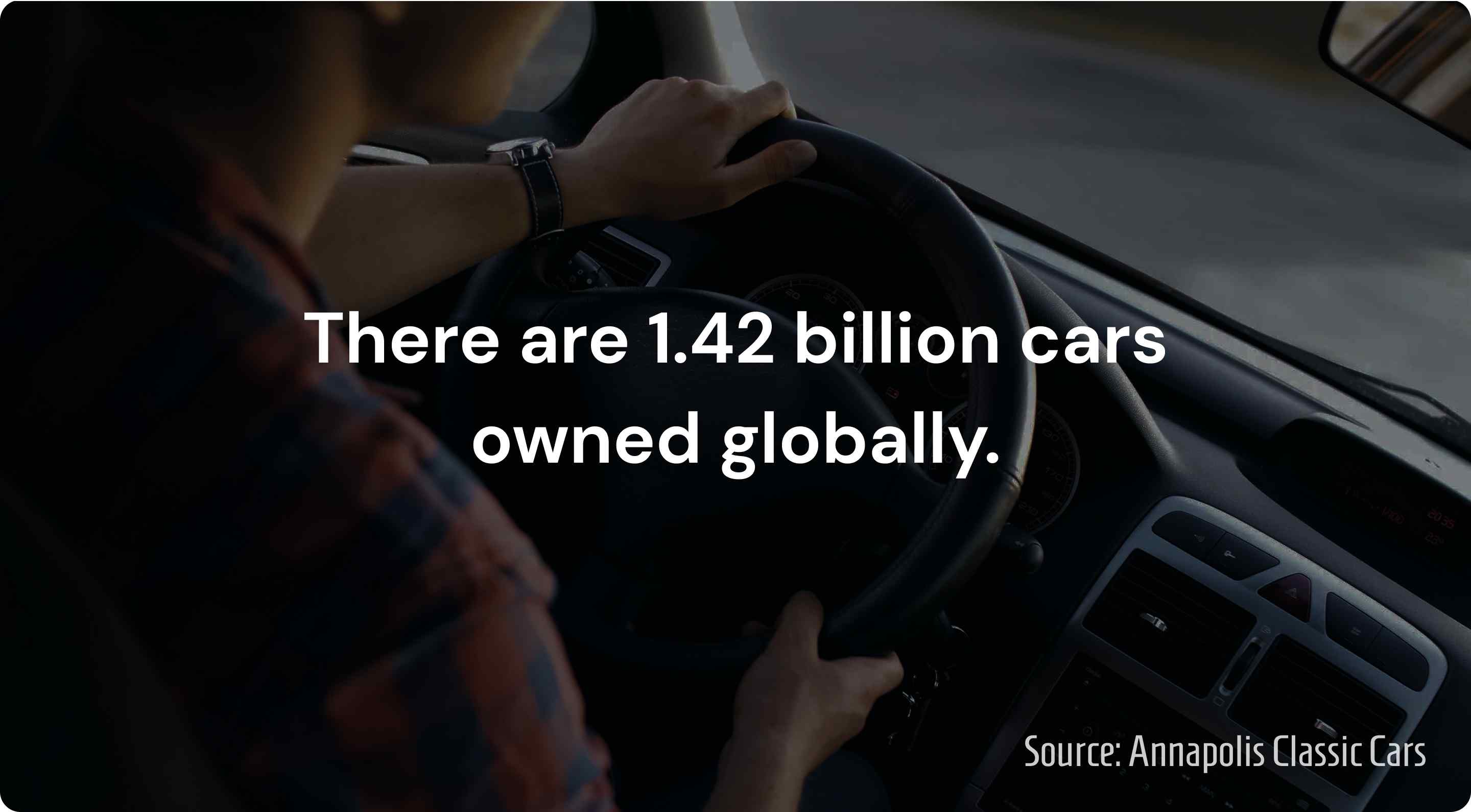 How big is the global car market?

Global car sales are expected to reach almost 70 million automobiles sold by the end of 2021, an increase from 2020. 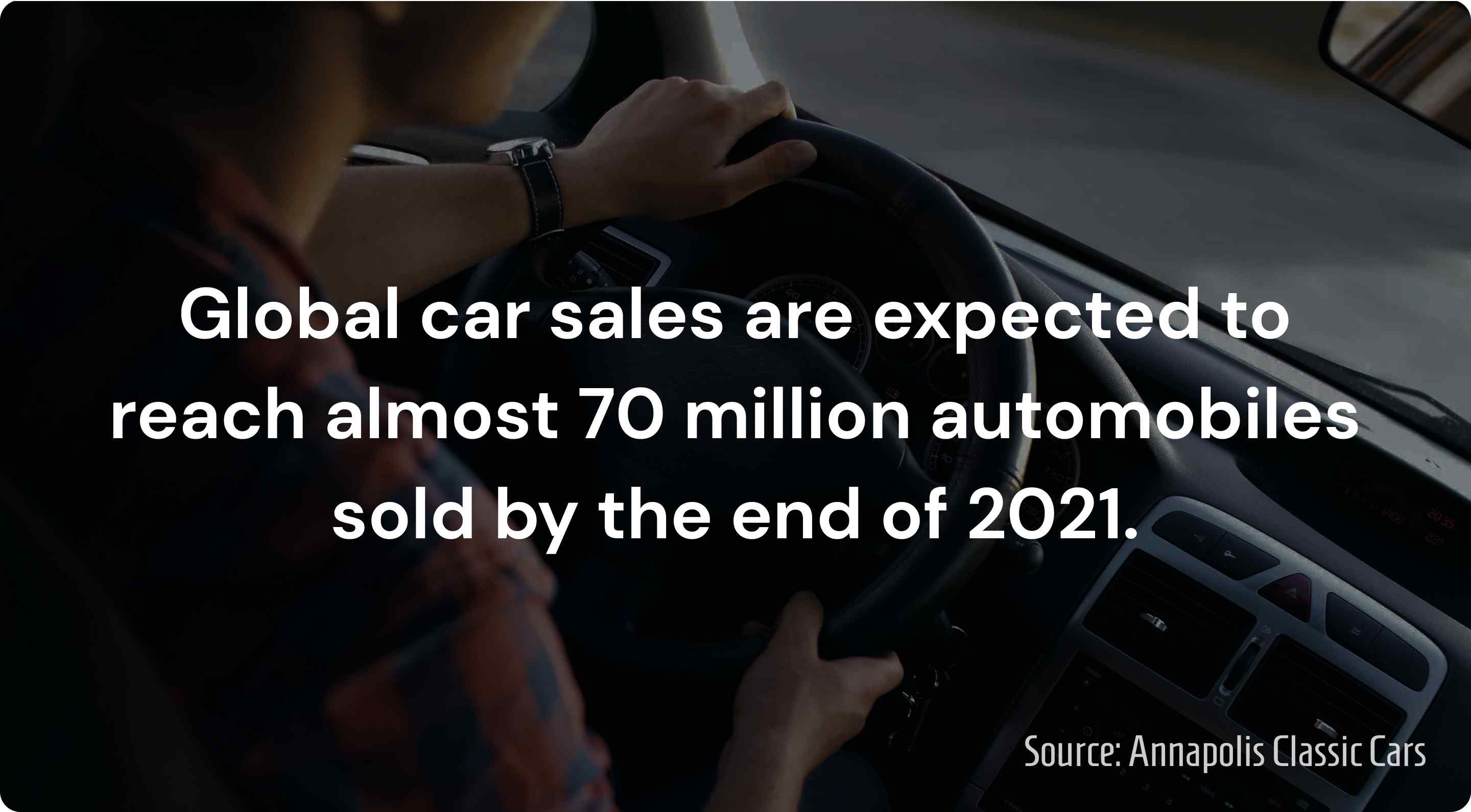 China is the only country that surpasses the U.S. in car ownership. As of 2017, China has more vehicles per household than the U.S. In fact, more than a quarter of all vehicles sold in the world that year were sold in China. Chinese car buyers purchased 27.5 million vehicles that year alone, and the trend is expected to continue due to the country's fast-growing population.

Does everyone in America own a car?

No, not everyone in America owns a car, as around 9% of households in America do not own a car. 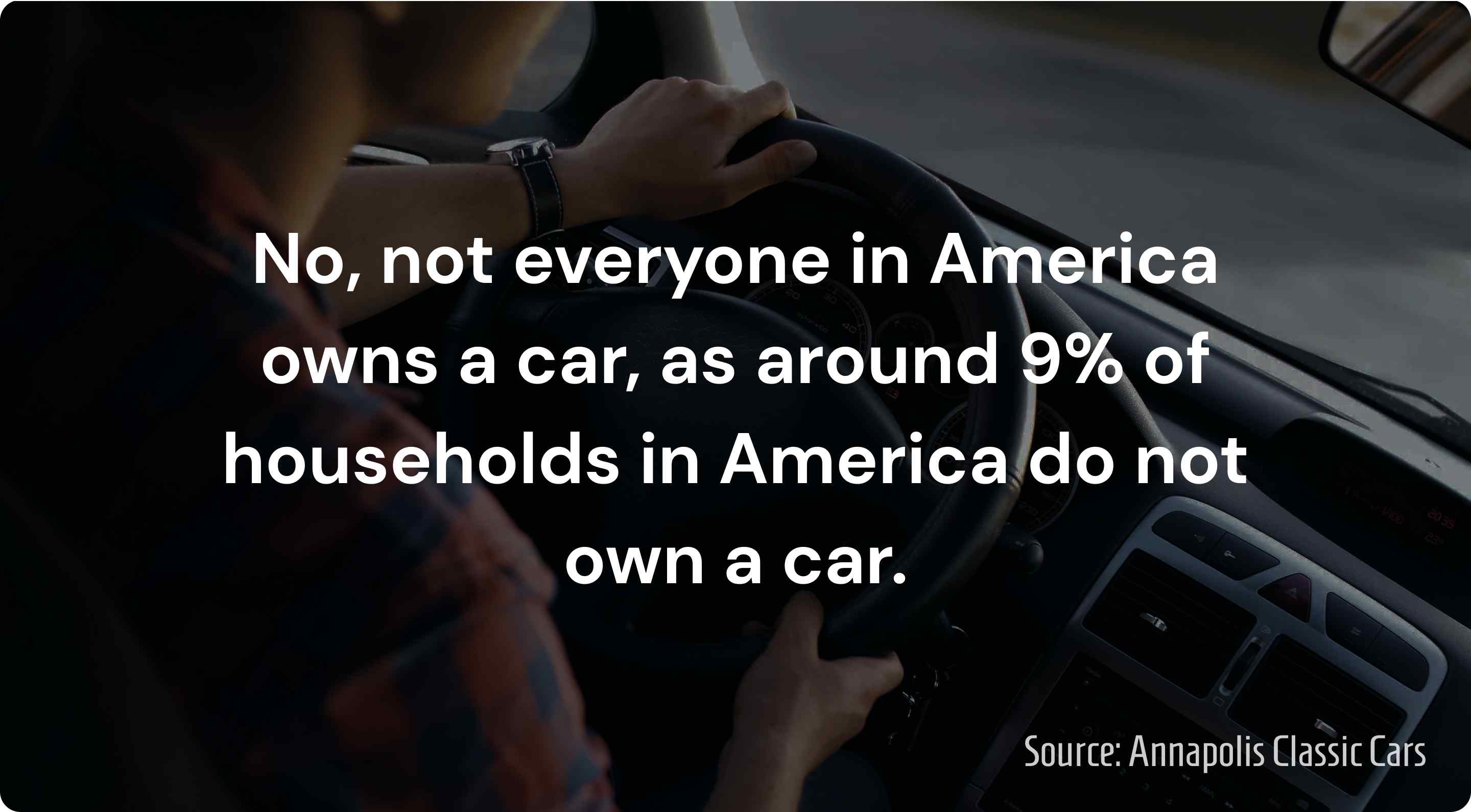 Are there more cars than people in America?

The overall number of cars in America is less than the country's population. With that said, the US has one of the highest numbers of motor vehicles per capita in the world (around 840 per 1,000 people). 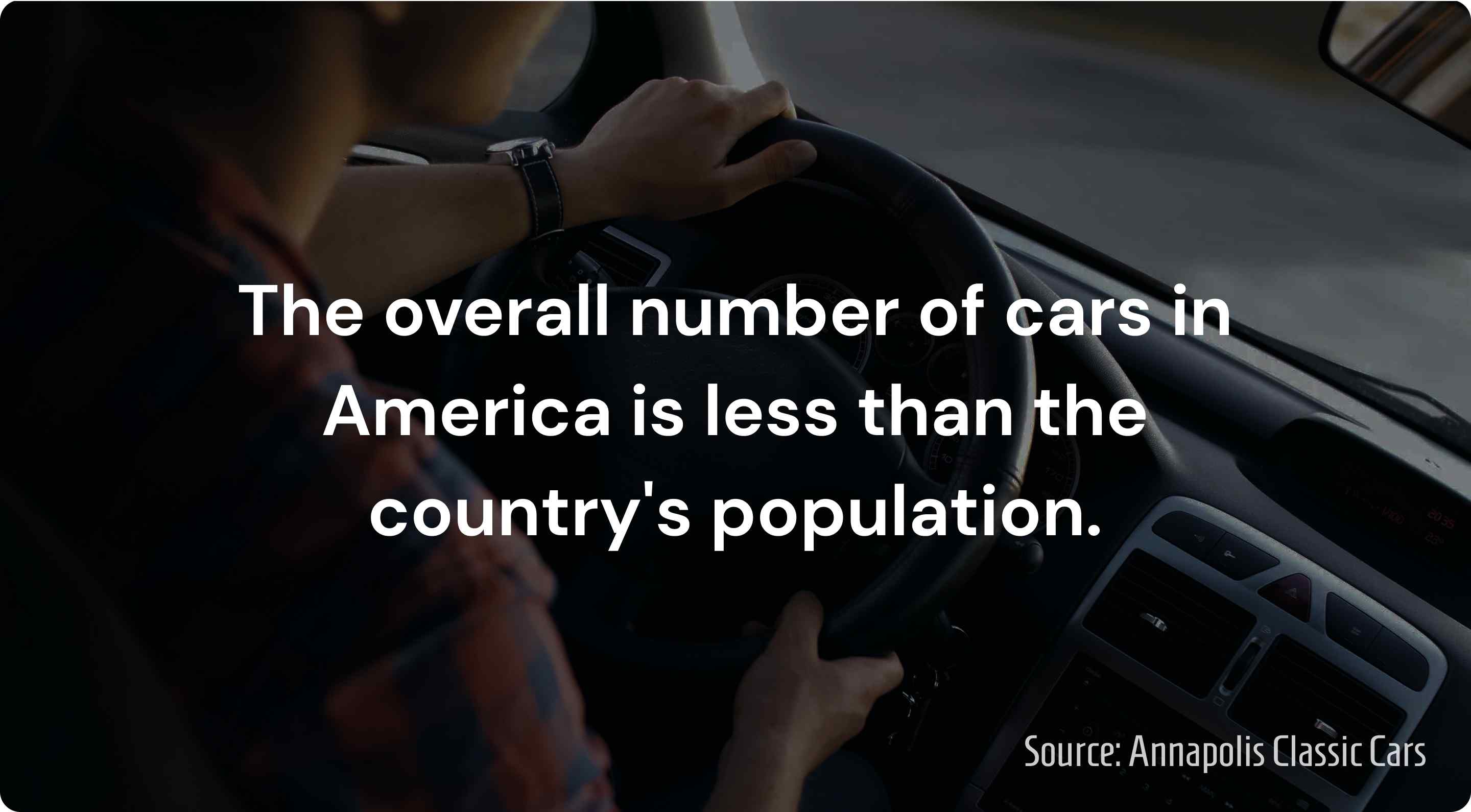 However, the data on how many Americans own cars varies significantly based on the location.

For example, states such as Montana, South Dakota, and Wyoming have a per capita availability of cars that's above 1, while other states like New York and New Jersey have it closer to 0.5.